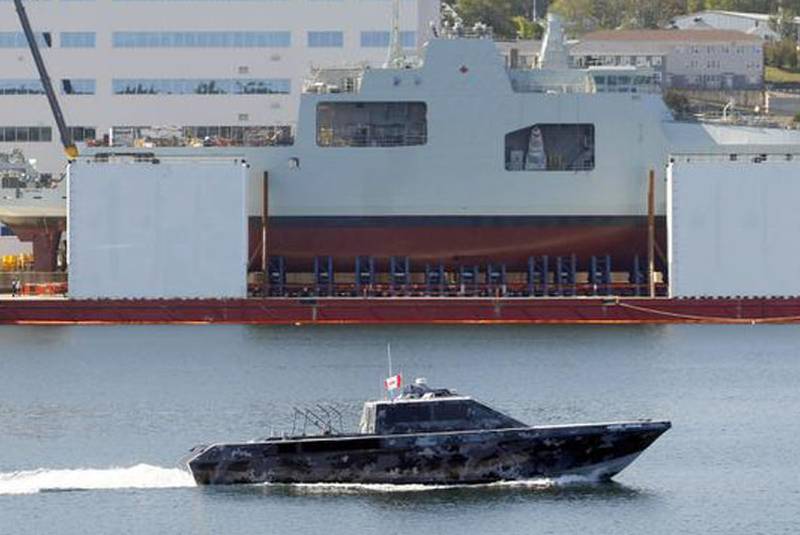 Halifax-based Leeway Marine could have called their new vessel Kokomo. Like the line from the Beach Boys’ song, the newly bought and named Leeway Striker will get there fast and then take it slow. Leeway specializes in research and survey operations in inshore and midshore waters.

With a top speed of 100 kilometres per hour, the Striker will get to its destination quite a bit faster than the company’s mainstay, the Leeway Odyssey, before dropping down to a fraction of that speed to do the surveying.

Leeway has been operating the Odyssey out of Halifax since Jamie Sangster started the company in 2015 after leaving the Royal Canadian Navy.

Built in 1977, the Leeway Odyssey is the former CCGS Louis M. Lauzier, which was retired and sold by the federal government when the new Hero Class midshore patrol vessels entered service. Leeway converted the vessel and charters it out to conduct hydrographic surveys, and other scientific work.

Leeway Marine recently bought a new vessel, the Leeway Striker, and sailed it to Halifax. Built by Riverhawk Fast Sea Frames of Tampa, Fla., the boat was built at a cost of $10-million. Thanks to an unsuccessful bid on a U.S. Defense Department contract by its builder, the boat was available at a significant discount.

The boat is designed to be fast and stealthy. Constructed of fiberglass, its top speed is just over 100 km/h, thanks to its three diesel engines which produce over 5,000 horsepower. Given all that power, the boat is amazingly quiet. The boat is currently painted in a grey and purple digital camouflage pattern, making it hard to see, hear and pick up on radar.

When the boat arrived, there was much speculation about what it would be used for. Given the intent behind the design, applications in law enforcement and fisheries patrol were obvious possibilities, and several naval applications come to mind as well.

Last week, Leeway Marine signed a partnership with Newfoundland’s Kraken Sonar Systems. Kraken, which also maintains an office in Dartmouth, builds a synthetic aperture sonar sensor, along with towed and autonomous vehicles to operate the sensor from. The synthetic aperture sonar is used to image the sea floor, and collect bathometric data at higher resolutions than traditional side scan sonar systems. Kraken’s technology allows it to deliver high resolution images cheaper than other imaging systems. And that’s why they partnered with Leeway Marine.

Currently sonar surveys are typically conducted by large vessels which can take several days to reach a survey location, perform the survey and then return to port. These large ships have a minimum required crew, and 24 hour operations require at least double the crew of a day trip.

I spoke with Kraken’s director of business development, Jeff Bartkowski, at the recent DefSec Atlantic conference. He told me that little can be done to speed up the actual survey which is limited to about eight knots or 14km/h. Any faster and the sensor won't collect data.

Bartkowski envisions Leeway Striker enabling midshore surveys to be done in a day. Using the speed of the Leeway Striker to its advantage, considerable savings can be had by quickly getting to and from survey sites.

For comparison, Halifax to Sable Island is about 290 kilometres. The Leeway Striker makes the trip in three hours, while the Leeway Odyssey cruises at 22km/h making the voyage to Sable Island a 13-hour trip.

An added benefit of being able to complete a survey as a day trip, in a smaller vessel, is that a much smaller crew is required. By shortening the amount of time the vessel needs to be chartered to complete the survey, and reducing the number of people required, considerable savings can be had.

There will always be a need for larger research vessels. They allow for longer surveys, higher cargo capacities, and onboard lab facilities. The partnership between Leeway Marine and Kraken Sonar Systems will make advanced seabed surveys accessible to more organizations than ever before.